The stereotype for Scotland is that Edinburgh is the city of government, class, and culture. While Glasgow is bigger, rougher and still a reflection of its more industrial past. I’m definitely happy that I chose to live in Edinburgh, but Glasgow definitely has a character that is more complex than the stereotype and its a very attractive city.

Glasgow is the current centre for music – most of the big bars and clubs are located here.  The music scene is world famous for launching bands like Franz Ferdinand and Snow Patrol. Glasgow is just more friendly to the night owl in me. We went there to visit King Tut’s Wa Wa Hut and hear some music.

I know less about it, but Glasgow also has a history of being a centre for art. I imagine the lower property cost and large art school is a big part of the attraction. A group of Glasgow painters take up a very prominent position in the collection of the National Gallery mostly for their portrayals of everyday people.

Its a very different place now, but Glasgow is also the city where my grandmother grew up.

Over the winter holiday, Aarti and I walked the streets for a few days. We went to the cathedral where St Mungo is supposedly buried. I also insisted on a walk through the Necropolis.

Before water and sanitation improvements, Glasgow was a very crowded and unhealthy city to live in – this necessitated the construction of several very large cemeteries. There are at least two other Necropolis’ that we didn’t visit. The design was based on Pere Lachaise in Paris, where I went in search of George Orwell. However, unlike pere lachaise, there were no recent arrivals; it didn’t seem full, so I guess it had been closed – it had been raining, but the drainage was not great. Also, it neighbours a big brewery and a highway.

After that, we made it over to Glasgow Green and the People’s Palace and saw the large terra cotta fountain and had lunch at the gardens. It was pretty quiet when we were there but that probably had more to do with the time of year and cold weather. According to one of the plaque we read, James Watt was living close by when he came up with the idea for the steam engine. 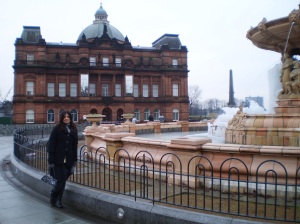 In my history research, I’ve also read that Glasgow owed much of its wealth from the 1700’s to the Tobacco and Sugar trade based in the Caribbean. Much of that wealth was acquired through less than honourable means including a reliance on the slave trade. The behaviour of those wealthy landowners even bothered Adam Smith and caused him to question his economic theories. Scotland definitely punches above its weight, but just like every other country some of the uglier bits of history are glossed over.